School summer holidays are opening up a major class divide between the fitness levels of deprived children and their more affluent peers due to a lack of affordable physical activity offerings, new research from ukactive has revealed.

The findings – which were presented at the annual Congress of the European College of Sport Science (ECSS) in Germany last week (5th July) – show how the poorest 25 per cent of primary school children experience a drop in their fitness levels 18 times greater than the richest 25 per cent over the school summer holiday.

The authors believe the prohibitive cost of many school holiday activities, such as summer camps, means many of the poorest children are left slumped on the sofa in front of screens, putting them at much higher risk of deadly diseases such as heart disease, cancer and type-II diabetes in later life.

The findings form the second part of a landmark study from ukactive and children’s activity provider Premier Sport into physical activity among eight and nine-year-olds.

The research – which tracked the cardiorespiratory fitness (CRF) levels of more than 400 children in 13 schools across the North West of England over a 13-month period – was the first study of its kind to measure fitness levels both before and after the summer holidays.

The first tranche of research – released last year – showed how fitness levels steadily improve throughout the school year but these gains were all but wiped out due to ‘inactive summer holidays’, when activity levels plummet.

The latest findings, which are currently in peer review, highlight the ‘dramatic’ impact of deprivation on primary schoolchildren’s fitness levels, prompting the researchers to call for a major overhaul of activity funding to curtail these health inequalities.

They say the UK government’s promised £415m of Sugar Tax funding for school sport should be used to support out-of-term exercise sessions and in-school fitness measurement to ensure children maintain active lifestyles during the summer break.

Dr Steven Mann, ukactive Research Director and lead author said: “There’s a growing class divide around fitness levels due to the summer holidays and the government must urgently address these Victorian-style health inequalities to give every child a fair chance of a healthy start in life.

“Our research with Premier Sport suggests deprived children are being plonked in front of screens for hours on end, while their more affluent peers are able to maintain their fitness levels through summer camps and other activities.

“Money from the £415m Sugar Levy should be used beyond the school gates to plug these gaps in provision and ensure all children can access physical activity and pick up vital healthy habits from an early age.

“Being inactive as a child sets a dangerous precedent on a number of levels. As well as being linked to impaired physical development, shorter attention span and lower grades, an inactive childhood means that person faces much higher risk of deadly diseases such as heart disease, cancer and type-II diabetes in later life.”

Chief Executive of Premier Sport, David Batch said: “Inactivity and sedentary behaviour is one of the biggest challenges facing young people today. This research not only highlights the significant gaps between deprived and affluent areas. But more importantly reaffirms the need for data-driven decisions.

“Whilst the money from the sugar tax levy is welcomed, we need to ensure the money is used by those in most need of intervention and that its impact can be measured. To do this effectively we first need to understand where individuals are now. Then we can implement appropriate interventions, to not only maximise the benefits to participants but also ensure any investment is being well spent and has the maximum impact.”

As a result of the findings, ukactive Kids – the not-for-profit’s dedicated children’s arm – is working to embed greater levels of activity throughout the school day and at home to unlock the myriad physical, mental and social benefits that structured physical literacy sessions can have on a child’s development.

ukactive Kids will kick-start this project with a major nationwide mass workout as part of National Fitness Day on 27th September. The 10 at 10 project will see 10,000 schools across the country take part in 10-minute bursts of activity at 10am in playgrounds, classrooms, school halls and open spaces, with the aim that these sessions become a mainstay of the school day and can be replicated at home during school holidays.

ukactive Board Member Adrian Packer CBE, chief executive of CORE Education Trust, said: “We all want our children to lead happy and healthy lives in which they can flourish and thrive, but this can only be achieved with an urgent rethink of our approach to getting children active.

“This goal cannot be achieved by working in silos. We need a whole-community approach to instilling physical activity as a daily habit and initiatives such as 10 at 10 can be a great catalyst for setting this into motion and providing the tools for children to carry physical activity into all aspects of their lives.”

Previous research has indicated that half of seven year olds in the UK do not meet the Chief Medical Officer’s minimum physical activity guidelines of at least 60 minutes of physical activity every day, creating a ‘ticking time-bomb’ of health issues in future years.

The ukactive Research Institute measured the Cardiorespiratory Fitness of over 400 schoolchildren from 14 schools in the North West of England during the 2014/15 academic year, using the Premier Sport My Personal Best Challenge. This was the first study of its kind to measure fitness levels both before and after the summer holidays.

The study found that British schoolchildren are on average losing 80 per cent of fitness gained during term time through ‘inactive summer holidays’. Children taking part in a new fitness measurement programme were able to run a further 120 metres in July, before the summer holiday, than in the same test in September. This suggests that term-time improvements in physical activity were being eroded by sedentary school breaks. The children’s average BMI also worsened during the summer holiday, rising from an average of 17.64 kg/m2 in the spring to 18.26 kg/m2 in September.

Further analysis revealed that the deprivation level of the local area in which the school was located had an effect on the pupils’ fitness levels [Figure 1]. The pupils at schools situated in more deprived locations had worse starting fitness levels and a larger decline in their fitness levels, over the summer holidays, than those attending schools in less deprived areas.

The ukactive Research Institute – who carried out the programme using the My Personal Best Challenge developed by children’s activity provider Premier Sport – presented the latest findings at the annual Congress of the European College of Sport Science (ECSS) in Germany on 7 July 2017. 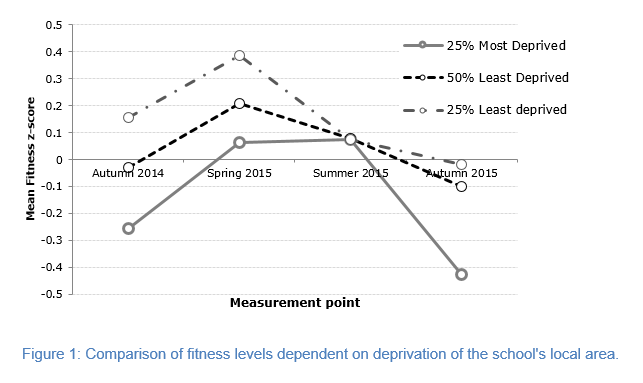 Premier Sport is the UK’s largest children’s coaching company of its kind, successfully delivering more than 25,000 sport and physical activity sessions every month. Premier Sport supports teachers in their curriculum delivery and provides parents with an invaluable service before, during, afterschool and during holiday periods.

Of the schools which took part in the My Personal Best programme:

BMI is an index used to indicate whether a person is over- or underweight. It is obtained by dividing a person’s weight in kilograms by the square of their height in metres. For children in this age group an index of 13.4 to 20 is normal for girls and 13.5 to 19.1 for boys.

We continue to call on the Government to put the fitness sector at the heart of the nation's recovery, fighting to… t.co/RO9Y6SY6Ty